Chinook are the largest species of Pacific salmon.  The name refers to the Chinookan peoples. Chinook are native to the north Pacific ocean and the river systems of western North America, ranging from California to Alaska, as well as Asian rivers ranging from northern Japan to the Palyavaam River in the Arctic north-east Siberia.   Chinook are highly valued for their dietary nutritional content, which includes high levels of important omega-3 fatty acids.

A large Chinook is a prized and sought-after catch for a sporting angler. Adult fish range in size from 24 to 36 inches, but may be up to 58 inches in length. They average 10 to 50 pounds, but may reach 130 pounds. The current sport-caught world record, 97.25 pounds and was caught on May 17, 1985, in the Kenai River in Alaska.  The commercial catch world record is 126 pounds caught near Rivers Inlet, British Columbia in the late 1970s.

Coho salmon are also known as silver salmon or “silvers“.

Coho run along both sides of the North Pacific Ocean, from Hokkaido, Japan and eastern Russia, around the Bering Sea to mainland Alaska and south toMonterey Bay, California.

Coho are regarded as excellent table fare as they have a moderate to high amount of omega-3 fatty acids, which are also essential when judging taste.

Salish Seafoods’ coho were released from a tribe owned and managed net pen structure on the eastern side of Squaxin Island. The fish are released as smolts, migrate out into the Pacific ocean, return on a two-year cycle and are caught by Squaxin Island tribal fishers. 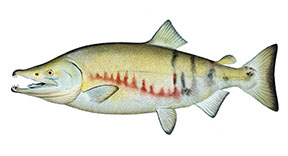 Adult chum usually weigh from 9.7 to 22.0 pounds with an average length of 24 inches. The record chum was 42 pounds and 44 inches and was caught in Edie Pass in British Columbia.

Chum are most commonly used for smoking.