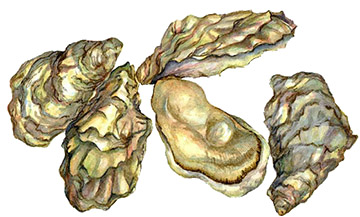 Introduced to the Pacific Coast of the US in the 1920’s, it is now the most widely farmed oyster in the world.

Its large, rounded, radial folds are often extremely rough and sharp. The two valves of the shell are slightly different in size and shape. Shell colour is variable, usually pale white or off-white. Mature specimens can vary from 3 to 12 inches in length.

Pacific oysters are found on firm or rocky beaches intertidally to 20 feet. Their shells are fluted, irregular, chalky-white or gray, new growth often colored purple, and can be distorted to conform to the shape of the object to which the oyster is attached. Oysters are often found in groups attached to one another or to an object such as a rock or a shell. Oysters have uneven valves (shells). The lower shell is cupped and often attached to a hard object. The upper shell is flattened and smaller than the lower.

The optimum salinity for Pacific oysters is between 20 and 35 parts per thousand (ppt), and they can tolerate salinities as high as 38 ppt. The Pacific oyster is also very temperature tolerant as it can withstand a range from 30 to 95 °F. 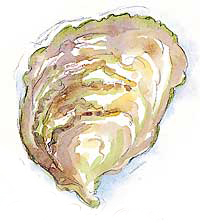 This bivalve mollusk is an oyster species native to Puget Sound and ranges as far north as Southern Alaska.  It was named after the Washington State capitol, Olympia.

Olympia oysters grow to 3-1/2 inches in diameter and are found on mud-gravel flats, in tide pools with fresh water seepage in intertidal zones. Their shells are more round than Pacifics, irregular to oval shaped. The exterior is gray, the interior is white or iridescent green. There are notches near the hinge and Olympia oysters have a triangular ligament.

Their habitats must have water temperatures between 43 and 68 degrees Fahrenheit, with a salinity above 25 ppt. However, the oysters can survive in areas with streams that cause a flux in the salinity.